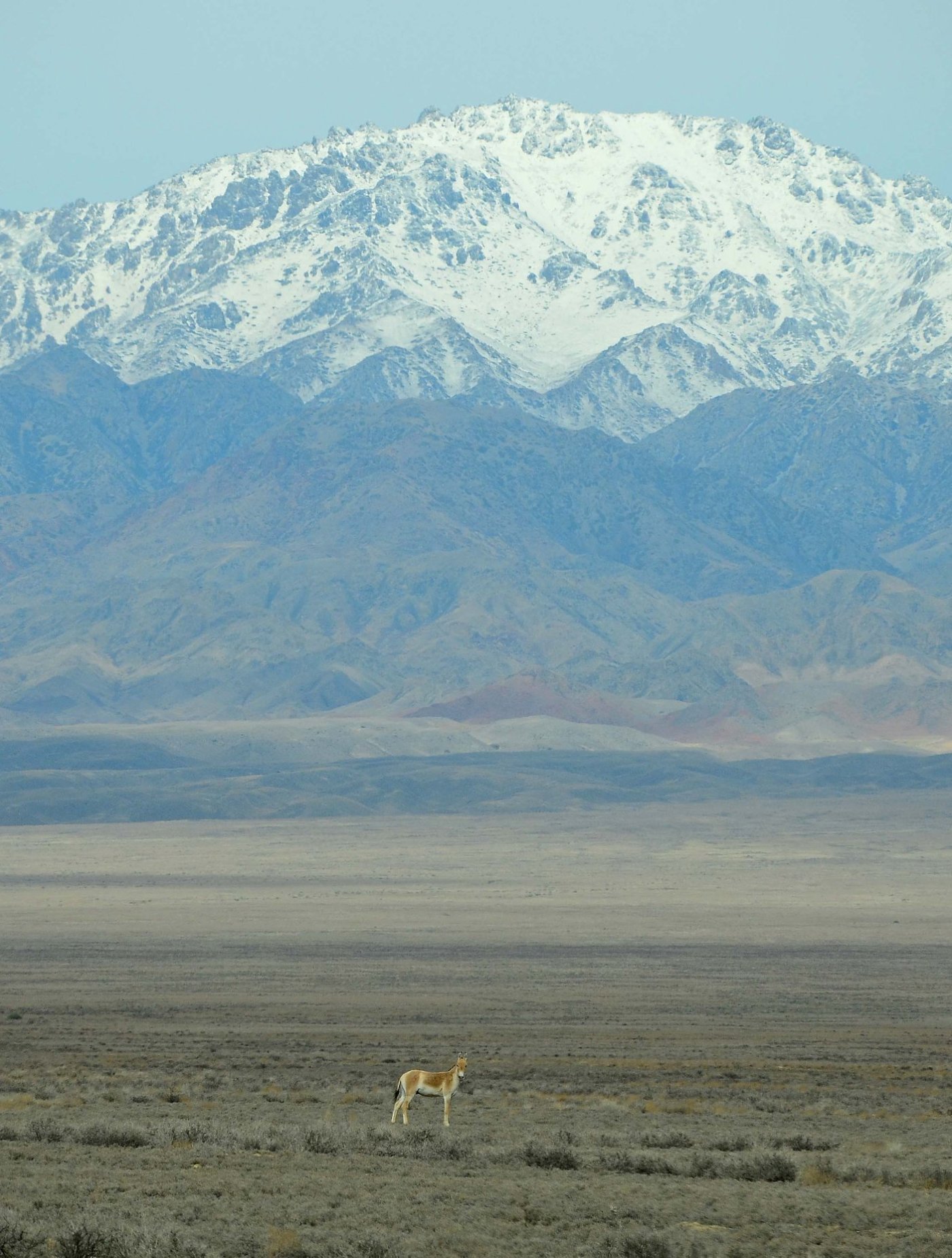 In October 2018, ACBK and internationalpartners (led by the Norwegian Institute for Nature Research) together with theCentre for Translocations of the State Enterprise “Okhotzooprom” (staterangers) and Altyn Emel National Park started another attempt to catch andtranslocate wild kulan from the Altyn Emel National Park to the Altyn Dalareserve in the Torgai steppe. Attempts to drive animals into the capture corralwere made on seven consecutive nights (16-22 October 2018), but none were successful.In no attempt were animals even driven close to the corral opening. There wereseveral major differences in the preconditions for this year’s activities:

(1) There was a difference in the weather prior to the actual capture. Because of a dry summer there was very little vegetation and water within the zone where the capture corral was placed. Most kulan remained in the central region of the park – where we had not been permitted to construct our corral because it is the national park’s core zone – and to the extreme western end. The result was that there were only a few small groups of animals (single animals and a few groups of 10-30) within the 5-10 km radius of the corral that is a practical capture distance.

(2) Furthermore, the weather during the middle part of the capture season was poor, with rain, snow and fog reducing visibility to a level where chasing had to be stopped for several of the most important hours after sunset, as the animals were simply not visible. Strong wind also influenced kulan movements, pushing them further into the mountains and away from the corral.

(3) The distribution and behaviour of the animals this year required chasing in very challenging terrain in a well-coordinated manner. However, following the strategy of the Committee for Forestry and Wildlife of the Ministry of Agriculture of the Republic of Kazakhstan (MoA), we were requested to use a combination of staff from Altyn Emel National Park and the new Centre for Translocations of Okhotzooprom to drive the cars and capture the kulan. The consequence of the required changes in the capture team meant that we were faced with two institutional groups, one of which had no experience of kulan capture. The lack of experience with the animal, lack of detailed knowledge of the local terrain, the lack of previous cooperation between the two institutions, and particularly a lack of coordination in the first few days of the capture were reasons for inefficiency and contributed to the failure of the whole activity.

(4) Unfortunately, the quality of the vehicles provided was low. While they were principally the right type of vehicle, they were in poor condition, not allowing them to maintain chase speed and becoming damaged in important moments of the capture process, which allowed the animals to escape.

(5) Another factor, making the whole operation more complicated than in 2017, was that the helicopter (Mi-26) which made the 2017 transfer so smooth was no longer available for 2018 because the company suddenly increased the price fivefold. The alternative required us to plan to use a transport plane (An-12). This plane only had limited availability due to other contracts which forced us to plan capture windows many months in advance around the plane’s availability rather than around the animal’s distribution. In addition to this, the plane had an engine failure just when the capture was about to start.

The first attempts to drive animals were frustrated by the distribution of the animals and the new capture team’s inexperience at working together. We then had several days of poor weather (rain and snow which gave poor visibility) – although attempts were made anyway. By the end of the week the team had begun to work better together. However, at this stage the few animals (1-3 groups of 10-20 animals each night) that were in the capture zone had already been so frequently chased that it was not possible to drive them into the corral. The result was that despite 7 consecutive nights of chase attempts we had not captured any animals, and indeed had not even come close. As there were still no more animals in the zone, the airplane’s availability was coming to an end, and the weather conditions at the release site were forecasted to deteriorate making access challenging, we decided to abandon the attempt for this year.

(1) The consequence of the non-availability of the Mi-26 helicopter implied that we could not simply load the boxes from the capture corral in National Park “Altyn Emel” directly into the helicopter and then directly offload them into the enclosures at the release site in Torgai after 9 hours like in 2017. Instead, we had to plan to drive the animals by truck to Almaty airport (approximately 4 hours), reload them into a cargo plane (an An-12) to fly 3-4 hours, and then reload them again and drive them by truck to ACBK’s reintroduction centre for wild ungulates in the Torgai steppe. The original plan for this was based on being able to use the airport at Arkalyk, but this possibility was removed a few days before the capture season started when the civil aviation authority declared the airport to be unusable so that we had to quickly change our plans to use the airport at Kostanay (see Map 1 for location of place names and Table 1 for transport time). This would have added 1 hour of flying and implied a 12-hour drive by truck (5-6 hours longer than if we had the Arkalyk option). Because the An-12 had other work we were also only able to have the plane for two 3.5-day windows. As it happened, the plane had to undergo emergency repairs (an engine replacement) during the first window, although a Ukrainian alternative plane became available after receiving special permission to fly domestically within Kazakhstan. This exposed how vulnerable the whole operation was to externalities.

Without access to the helicopter which was so instrumental for the 2017 translocation, Altyn Emel National Park is a much less viable source of kulan for reintroduction to the central steppes. The very long distance (1200 k straight line, resulting in 2000 km by road) makes using road transport impossible because it would require about 50 hours of non-stop driving. It is very likely that most animals would not survive, and survivors would face reduced fitness upon arrival due to long-term stress, and the approach would not meet any international animal welfare standards that precondition international funding and approval. For example, EU rules do not allow more than 24 hours of truck transport for captive wild equids. The only potential viable route is the combined truck, airplane, truck method that we had planned this year. However, our experience with organising the logistics in 2018 has shown us how complex this approach is, with many bottlenecks in the system where problems could arise.

(2) If another capture is to be attempted in Altyn Emel National Park there is a need for a number of changes to the approach. Firstly, a second capture corral constructed further east in the park’s core area would increase the chances of success as it would allow us to respond to between-year changes in animal distribution. This would require considerable extra funds as kulan require a solidly built corral. Secondly, there needs to be a better planning of the capture approach and a better coordination of the institutions / drivers / cars involved in the capture-drive to ensure that no time is lost and that animals are not disturbed unnecessarily. Thirdly, we would need to plan for a longer capture window, with plans made to have rotating veterinary teams on standby and to potentially maintain kulan in the corral for multiple days until transport windows align.

The kulan translocation project is going to continue at least until 2019 with good chances of further activities even in following years. Because of the points above we propose to prioritise the capture of animals from Barsa Kelmes State Nature Reserve (SNR) in 2019 (Map 1). Using this different source population would have the following advantages:

(1) It is much closer to the Torgai steppe (450 km straight line, 600-750 km by truck) so that a truck-only transport is feasible – which is considerably less logistically challenging and allows for more flexibility (no need to maximize the number of animals to fill an airplane at a predefined date) and is also cheaper.

(2) Capture in Barsa Kelmes SNR would have to avail of a trap-enclosure at a water-point – which is likely to lead to the use of multiple capture events with smaller numbers of kulan – so that multiple small transport of 6-10 animals would be feasible. This would also ease the logistical organisation. This form of capture does not necessitate a large team of rangers and multiple vehicles driving at night in challenging terrain and consequently is much safer for the capture team and results in less disturbance for kulan.

(3) It is likely that the animals in Barsa Kelmes SNR have a higher genetic diversity than those in Altyn Emel National Park, as they were the original source for Altyn Emel.

(4) When looking at the distances moved byanimals already released in Torgai from the 2017 translocation, it seems quite possible that animals from Barsa Kelmes SNR might learn to establish functional movement connectivity between this existing population and the reintroduced population on the Torgai steppe.

Overviewof the different routes for the kulan transport 2018 from Altyn Emel Nationalpark (requiring a truck-plane-truck approach) and a possible alternative optionfor 2019 from Kaska Kulan, within Barsa Kelmes National park (potentiallyallowing for a truck only transport).